As the night falls on Hurawalhi, not all guests settle for just admiring the infinity pool as it sparkles and creates a magical atmosphere around Coco Bar – the more curious souls often whet their appetite for adventure by joining a snorkelling tour that allows them to see another otherworldly light show – the coral reef that glows at night!

Fluoro snorkelling, also called fluo, glow and fluorescent snorkelling, is one of Hurawalhi’s Chic Bucket List experiences and widely popular for being outright mind-blowing. Already in the shallow water, a glow-in-the-dark spectacle can be enjoyed; you can expect to see the reef in a whole new light when you don specialised equipment (yellow mask filter and a blue light torch) and go for a snorkel at nighttime. From fluorescing anemones, shrimps and feather stars to brain corals and certain fish species, the reef and many of its critters glow in groovy, neon-bright colours.

Fluoro snorkelling uses special equipment that is able to capture the parts of the reef that fluoresce and emit a longer wavelength light, making them look bright green, pink, purple, blue or yellow when viewed through special filters and lit with a blue light. During the day or during a night snorkel with a normal torch, you see the reef in its true colours, but during fluoro snorkelling we can see some marine life become vivid and glowing. The individual species display different characteristics, meaning there is no rule as to whether one will fluoresce or not. Give it a try, though – perhaps you’ll be the first person to spot a glow-in-the-dark eagle ray or turtle! 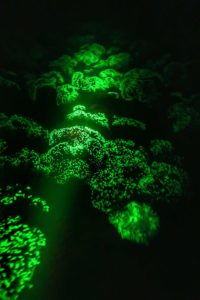 Tip from Prodivers: join a guided house reef snorkelling tour to see the reef at daylight first and then see the same area in all its glowing beauty on a fluoro trip. 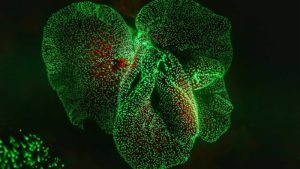 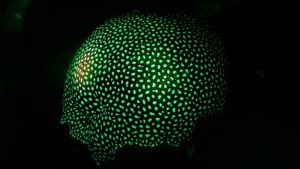 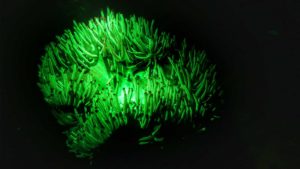 Plan Your Holiday with the Hurawalhi App!

Marine Science Workshop at Hurawalhi: The First of its Kind in Lhaviyani At...